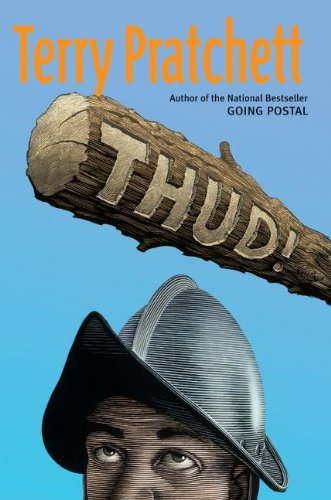 Ankh-Morpork's City Watch Commander, Sam Vimes, stars in the latest entry in Pratchett's popular Discworld series ( , etc.). "Thud" is the sound that commences the novel, as a dwarf is bludgeoned to death; it's also the name of a chesslike match that recreates the battle of Koom Valley, a long-ago fight between trolls and dwarfs. As the anniversary of the battle approaches, ancient politics and the present-day murder cause tensions between the trolls and dwarfs to boil. Though Koom Valley was a disaster for both sides, certain community leaders from each side have been spoiling for a rematch—something Vimes is duty-bound to prevent. In the midst of this, a push toward affirmative action forces Vimes to hire a vampire named Sally to the Watch. She's sworn off human blood, but that's cold comfort to the assortment of humans, dwarfs, trolls, werewolves and golems that make up the police force. Vimes and his motley crew of coppers are called upon to not only find the murderer and keep the peace but also, in a jab at , solve the riddle of a painting that reputedly holds the secret to what really happened at Koom Valley. Pratchett's fantastic imagination and satirical wit are on full display. .