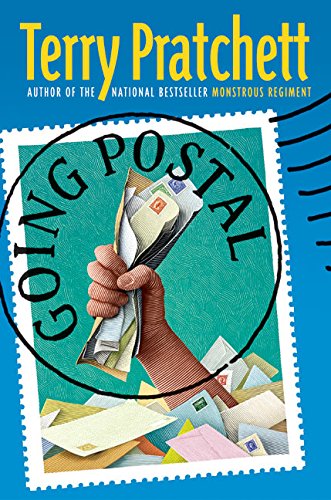 GOING POSTAL: A Novel of Discworld

British fantasist Pratchett's latest special-delivery delight, set in his wonderfully crazed city of Ankh-Morpork, hilariously reflects the plight of post offices the world over as they struggle to compete in an era when e-mail has stolen much of the glamour from the postal trade. Soon after Moist von Lipwig (aka Alfred Spangler), Pratchett's not-quite-hapless, accidental hero, barely avoids hanging, Lord Havelock Vetinari, the despotic but pretty cool ruler of Ankh-Morpork, makes him a job offer he can't refuse—postmaster general of the Ankh-Morpork Post Office. The post office hasn't been open for 20 years since the advent of the Internet-like clacks communication system. Moist's first impulse is to try to escape, but Mr. Pump, his golem parole officer, quickly catches him. Moist must then deal with the musty mounds of undelivered mail that fill every room of the decaying Post Office building maintained by ancient and smelly Junior Postman Groat and his callow assistant, Apprentice Postman Stanley. The place is also haunted by dead postmen and guarded by Mr. Tiddles, a crafty cat. Readers will cheer Moist on as he eventually finds himself in a race with the dysfunctional clacks system to see whose message can be delivered first. Thanks to the timely subject matter and Pratchett's effervescent wit, this 29th Discworld novel (after 2003's ) may capture more of the American audience he deserves.