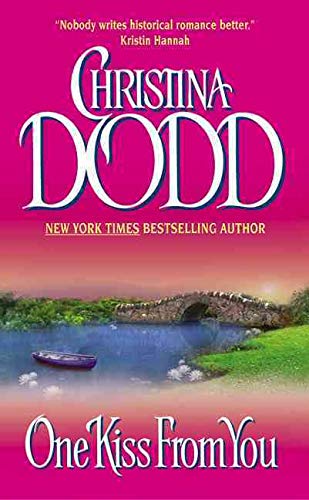 ONE KISS FROM YOU

Readers who adore Dodd's alpha male heroes will savor her latest Regency-era romance, which knits together an impostress, a missing duchess, several murders and an American with a vendetta. Self-described as "born timid," Eleanor de Lacy reluctantly agrees to impersonate her cousin, the duchess of Magnus, and stall Mr. Remington Knight, an American who just won the duchess's hand in marriage through a wager. Trapped in Remington's house, Eleanor soon finds herself in over her head as he ruthlessly employs every sensual weapon in his arsenal to tie the "duchess" to him. For not only does Remington enjoy the attraction sizzling between them, he also wishes to gain revenge against her family, who he holds responsible for his father's and sister's deaths. As the wedding date approaches, Eleanor loses more and more of her heart even as she gains confidence by standing up to Remington. Remington, meanwhile, finds his heart softening toward his lovely, unconventional duchess. Seasoned with generous humor, this sensual braiding of and showcases Dodd's easy, addictive charm and steamy storytelling. Though this book isn't part of Dodd's popular Governess Bride series (, etc.), it's sure to sate her many fans.