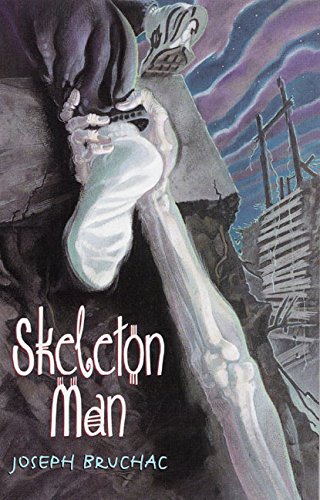 According to the gutsy sixth grade narrator of Bruchac's (; ) latest novel, the book draws from the traditions of Native American stories, especially one about a "skeleton man," for its spine-tingling effects. Not long after Molly's parents mysteriously disappear one night, her "great-uncle" shows up to claim her, with photographs of her family that convince the adults around her (but not Molly) that he is a relative. In fact, the photos look suspiciously like those that belonged to her father, who grew up on a Mohawk reservation. Each night, the bony guardian locks her into her room, allowing her to attend school during the day. Molly relies on the deciphering of her dreams, her "warrior-girl" courage and the support of her quirky but compassionate teacher to solve the mystery and rescue her parents. The eerie figure of the semi-human creature pretending to be Molly's uncle is particularly well drawn: "His fingers spread out so wide that they look like the talons of a giant bird.... His eyes are twin blue flames burning from within his skull." The mix of traditional and contemporary cultural references adds to the story's haunting appeal, and the quick pace and suspense, particularly in the last few chapters, will likely hold the interest of young readers. Ages 10-14.