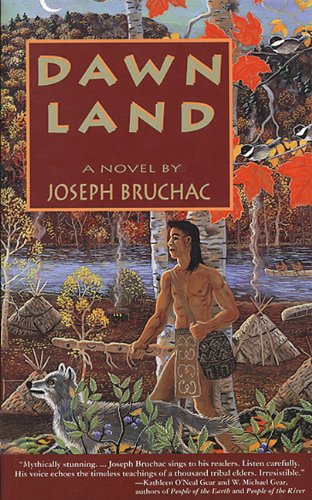 Young Hunter, the hero of Native American storyteller Bruchac's first novel, Dawn Land, returns in this slightly disappointing sequel. It is two years since the young warrior saved his tribe, the Only People, by defeating the Ancient Ones, evil giants who crave human flesh. The intervening moons have been so idyllic for Young Hunter and his people that he has begun to forget details of the encounter with the monsters and, indeed, has doubts that it ever happened at all. Now, however, new evil from a dimly remembered past approaches to threaten the Only People once again. Walking Hill, a woolly mammoth wounded by humans as the last Ice Age retreated, has sworn revenge for the loss of his family and for his painful spear wounds. Worse yet, the only Ancient One not killed by Young Hunter revives, determined to avenge the death of his kind. Warned by dreams, the brave young Native must once more defend the Only People. Meanwhile, taking impassive note of the conflict is the river Kwanitewk (aka Connecticut). The story is at its best when it incorporates actual myths from the oral tradition of the Abenaki (from whom Bruchac is descended). The narrative lacks the momentum of Dawn Land, however, so readers familiar with that novel may feel let down, while those new to the series may be confused by allusions to earlier events. (Sept.)
close
Details