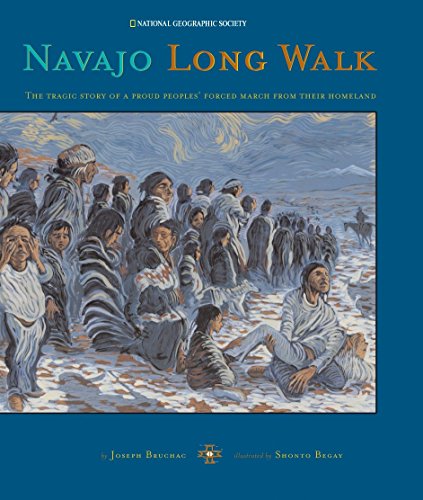 NAVAJO LONG WALK: The Tragic Story of a Proud People's Forced March from Their Homeland

"We were given two ears so that we may hear both sides of every story," notes Bruchac at the start of this detailed, sobering account of the Navajo people's forced relocation—on foot—from their homelands in what is now Arizona to the Bosque Redondo Reservation in the New Mexico Territory between 1863 and 1865. Writing initially in the present tense, Bruchac imagines a group of Navajos gathered around an elder. Their "circle of peace" is shattered by the arrival of American soldiers and their allies, the Utes, who will force the Navajos to abandon their lands and the "path of balance and beauty" to embark instead on "a trail of suffering and loss." He then chronicles the events leading up to the Navajos' displacement, beginning with their embattled relationship with the Spanish settlers in the 16th century, and he describes the horrors of the so-called Long Walks (the people walked over 470 miles) and of the makeshift reservation. The author examines the roles of U.S. leaders, such as General Carleton, who "did not listen to the native side of the story," and explores the conditions that led to the closing of the reservation in 1868 and the signing of "the first fair treaty" between the Navajo people and the U.S. government. Begay's () paintings, rendered with acrylics on clay board in swirling brushstrokes, convey urgency and emotion. His art reaches a new level of accomplishment and his captions, explaining his use of symbols, will help youngsters interpret the cryptic moments in his work. Ages 8-12.