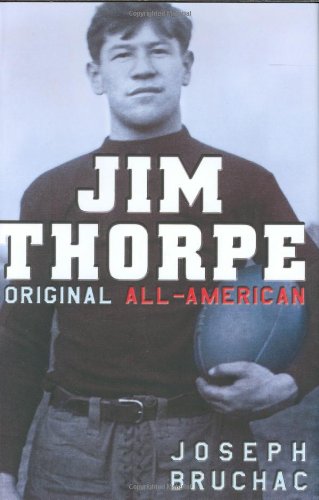 Drawing on meticulous research, Bruchac ( ) presents Jim Thorpe's (1887–1953) complex story, focusing on his years at Haskell and Carlisle Indian Schools, as a kind of imagined autobiography. Thorpe excelled at football, baseball and track, winning two gold medals in the 1912 Olympics for the latter. An error-ridden press story stated that he had played summer Class D baseball in North Carolina in 1909 and 1910, earning nominal pay; the piece unleashed a chain of events that culminated in Thorpe signing a proffered "confession" and being stripped of his Olympic honors. By adopting an equanimous, measured voice to serve as Thorpe's first-person narrative, Bruchac shines new light on facets of the Sac and Fox Indian's amateur career, from highlights of Carlisle's wins against college football's greats, to the mishandling of funds endemic at both the Bureau of Indian Affairs and the Indian schools. Bruchac illuminates Thorpe's complicated relationship with his Carlisle football coach, Glenn "Pop" Warner, whose own flaws emerge. (Warner led his winning teams while controlling proceeds from ticket sales and, arguably, Thorpe's amateur status.) In a cogent author's note, Bruchac explains that his research revealed many errors in previous books about Thorpe; and although he calls this a "novelized" account, he quickly points out that "this is not a work of fiction" and "much of the dialogue is taken from research." A selected bibliography and a peppering of period photographs round out an impressive work of scholarship. Ages 10-up.