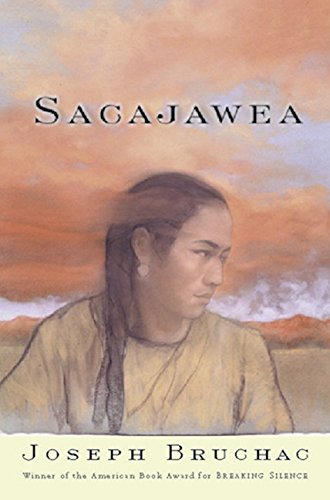 Bruchac's (The Arrow Over the Door) intimate novel about Lewis and Clark's epic Western exploration unfolds through the alternating voices of Sacajawea, their Shoshone interpreter, and Clark. Sacajawea's now-grown son, Pomp (Jean Baptiste Charbonneau), introduces the two narrators, explaining that Shoshone custom dictates that ""one can tell only what they have seen""; since he was not yet born at the beginning of the adventure, he recounts the tale as it was told to him. Sacajawea's chapter follows, opening with a creation tale of the ""great flood""--each of her chapters begins with either Shoshone tales or those of other tribes the crew encounters, and many function as cautionary fables; relevant journal entries introduce Clark's chapters. This framing device results in a few contrived references in the narrative (e.g., ""The fur trade, Pomp, can make a brave man rich or cost him his life,"" says Clark), and the assumption that Pomp already knows the story occasionally diminishes the suspense. But Bruchac builds the alternating chapters chronologically and keeps the pace moving. Both narrators recount intriguing cultural nuances; for example, when a deserter from the expedition is recovered, the Otoes Indians plead the white man's case, arguing that it would be better to kill him than humiliate him with a public whipping. The greatest strength of the novel, however, is Sacajawea's voice, enhanced by the lyrical repetition of traditional storytelling (""It was the Moon when the Leaves Fall from the Cottonwoods,"" she recalls of the day she first sees Lewis and Clark). The author adheres closely to journals kept by members of the expedition, creating characters who are both lifelike and compelling, at a fascinating juncture in history. Ages 12-up. (Mar.)
close
Details