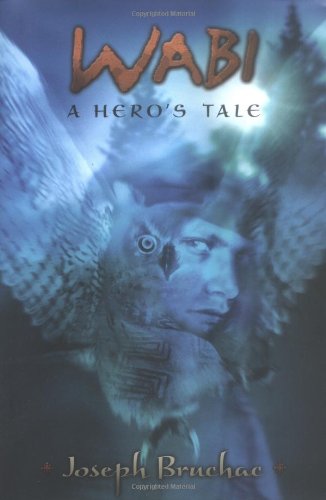 Bruchac's ( ) storytelling skills are on full display in this tale introducing an owlet narrator. Wabi's adventure begins almost immediately, when his brother pushes him out of the nest and into the path of a hungry fox. Wabi's great-grandmother, whom he's never met, comes to his rescue and takes him under her wing. She patiently answers the insatiably curious owl's questions, at times with stories. She tells him that the two of them share a "special gift": they communicate with each other in human language and are able to understand the speech of not only owls and people, but "other creatures toooo." Wabi becomes fascinated by the Native American residents of a nearby village, especially the children, whom he safeguards. Eventually, Wabi realizes that he is smitten with one of the teenagers, the sharp-tongued, headstrong Dojihla, yet recognizes the futility of his love. Guided by his great-grandmother, who confides a family secret, the love-struck owl attempts to win Dojihla's affection. The action continues when Wabi—accompanied by his trusty wolf companion, adopted while he was a cub—begins a harrowing quest to rescue the enslaved members of the wolf's pack and to save Dojihla's people from a deranged bear. Bruchac's tale agilely balances suspense, humor and romance. Ages 12-16.