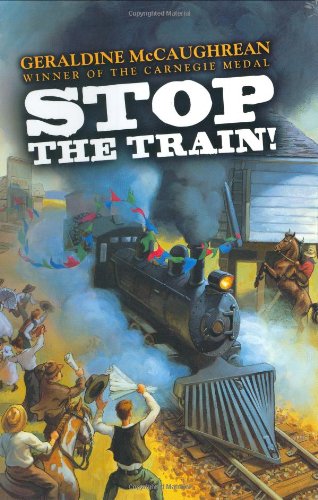 In a narrative that feels like the literary equivalent of a grand old western movie, McCaughrean () paints a vivid picture of turn-of-the-20th-century settlers who arrive at a barren patch of land in Oklahoma, with the dream of creating a city to call home. When the residents of the new town of Florence refuse to sell their coveted chunk of land—which is of strategic business importance to Clifford T. Rimm, the owner of a major rail line—the vindictive businessman vows to snuff out the town by not opening a train station there. The good people of Florence find themselves waging a war on two fronts: a battle of wits to try to get the train to make regular stops (resulting in a particularly hilarious episode involving lard on the tracks), as well as a vicious public relations battle with newspapers in bordering towns that portray the city as a den of filth and vice, "Sodom and Gomorrah called by a prettier name." The cast of characters may be enormous, but McCaughrean does an amazing job of bringing each one fully to life, from the stalwart Hulbert Sissney, to his plucky 10-year-old daughter Cissy and her friends, to the repentant Nate Rimm, son of the railway magnate. (The opening cast of characters helps readers keep track.) Just a few dozen pages into the story feels like time spent with old friends. This is both a period piece and an ensemble piece, and completely enjoyable on both counts. Ages 10-up.