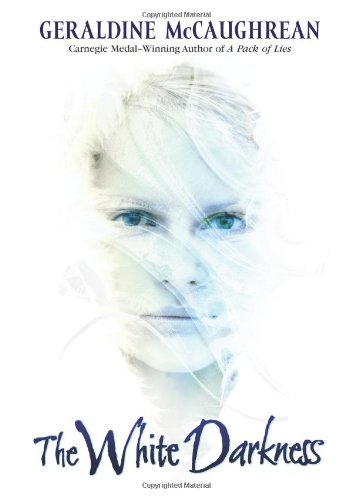 Symone, 14, narrates McCaughrean's ( ) tale about the trip of a lifetime gone horribly wrong. Hearing-impaired and unpopular, Sym appreciates the attentions of "Uncle" Victor, her dead father's business partner and the family's seeming benefactor. Victor, an eccentric genius obsessed with proving the discredited Hollow Earth theories of John Symmes, has fostered in Sym a lifelong fascination with Antarctica. Indeed, Sym's only companion is an imaginary friend, Lawrence "Titus" Oates, who perished in 1912 during Captain Robert Scott's ill-fated expedition to the South Pole. Sym is thrilled when Victor spirits her off for an impromptu trip to Paris, which morphs—incredibly—into a trek to Antarctica, as the two join a crowd of rich tourists for a guided look at "The Ice's" astounding landscape. Victor aligns with Manfred Bruch, a purported Norwegian filmmaker, and his son. Guests and guides alike become mysteriously ill, and the tour is cut short, but the plane intended to return the group to safety explodes. After Victor's "nice cup of tea" induces sleep in everyone else, the four abscond on Victor's mad quest for Symmes's Hole. The heroine's relentless self-deprecation, a necessary element of her unconditional acceptance of Victor, is nonetheless somewhat overplayed. But the ratcheting terror, thrilling double-crosses and gorgeously articulated star character—Antarctica itself—combine for a girl's adventure yarn of the first order. Ages 12-up.