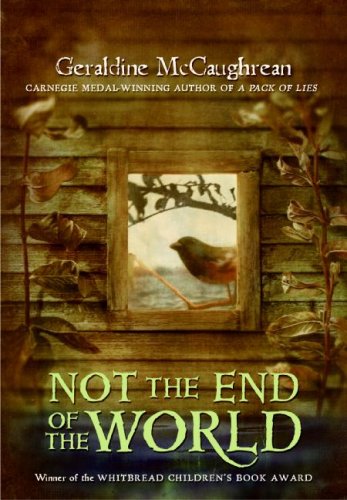 Not the End of the World

McCaughrean ( ) imagines life on Noah's Ark with a full complement of animals, insect infestations and dwindling supplies of fresh food, water and air. She masterfully transforms the famous biblical story through the eyes of Timna, Noah's fictional daughter, and occasionally from the perspectives of her brothers, their wives and her mother, Ama. Just after the flood, Timna, along with her favored younger brother, Japheth, rescues a boy and his baby sister from the surging waters and hides them in the Ark. Their act is in deliberate defiance of Noah and the older sons who believe that it is God's will that such "demons" should perish. Through Timna's perspective, McCaughrean examines the importance of making personal moral decisions. The heroine grows increasingly skeptical of Noah's beliefs as she becomes attached to the stowaways and observes the breakdown of human decency among her family members. Her brother Shem's wife grows increasingly angry and vindictive, while Timna's mother winds up a surprise ally (questioning Noah herself, Ama says to Timna, "one man's head is a very small place to try and fit the whole of God's intentions"). Young readers will identify with Timna's plight and her courage, as McCaughrean invites them to reexamine this age-old tale in her provocative retelling. Ages 14-up.