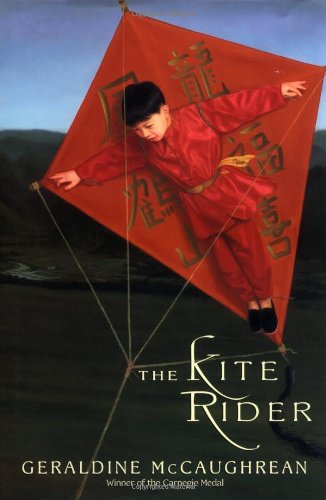 With her exuberant, nonstop plotting and supremely colorful setting, McCaughrean () grabs hold of readers' imaginations and doesn't let go. In 13th-century China, a 12-year-old boy prepares to say goodbye to his father, who is about to put to sea as a crew member of the , and to watch the testing of the wind, which involves strapping a man to a huge kite and seeing if it flies straight up (a good omen for the 's voyage) or at a certain angle (foretelling danger). But almost before Haoyou knows what is happening, the first mate makes his father the wind-tester, and Haoyou looks on in horror as his father becomes a speck in the distant sky, then returns, lifeless, to earth. All this McCaughrean accomplishes in less than 10 pages, establishing a breakneck pace, which she maintains with seeming ease. The story takes Haoyou from his determined efforts to prevent the evil first mate from marrying his beautiful mother to his joining a traveling circus as a kite rider, mastering his father's tragedy as he himself flies skyward into what the circus-goers take to be the spirit world. Eventually the circus reaches the court of the Kublai Khan, evoked here in splendor and awe. While Haoyou never becomes as compelling a character as those around him—a spirit medium cousin, the circus master, Kublai Khan—McCaughrean offers more than enough adventure, plot twists and exotic scenery to keep the audience fully engrossed. Ages 12-up.