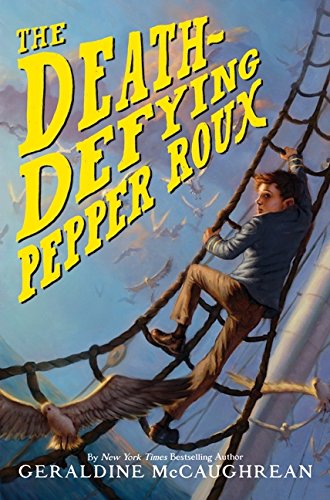 Kindhearted Pepper Roux has been led to believe that “[c]hildhood was a mouse trap from which he could never expect to escape,” his death by age 14 foretold in a dream. His maiden Aunt Mireille takes it upon herself to pave Pepper's path to heaven with daily prayer, constant confession, and rote memorization of last rites. So when Pepper awakens on his 14th birthday still alive, he launches himself on a sea voyage, intent on outrunning death. Mistaken for the ship's captain (his father), he is befriended by a compassionate, cross-dressing steward, Duchesse. Creating vivid characters is just one of McCaughrean's ( ) gifts—Aunt Mireille joins Dahl's Spiker and Sponge as one of the Most Evil Aunts in children's literature. Pepper flees across the French countryside from one disastrous job to another—delivery boy, horse wrangler, deli clerk, and even journalist, which allows McCaughrean to wink at readers as Pepper complains, “Copy editors cannot read anything without changing it.” As his journey ends in a cleverly orchestrated climax, readers will root for Pepper to get the ending he deserves—a happy one. Ages 10–up.