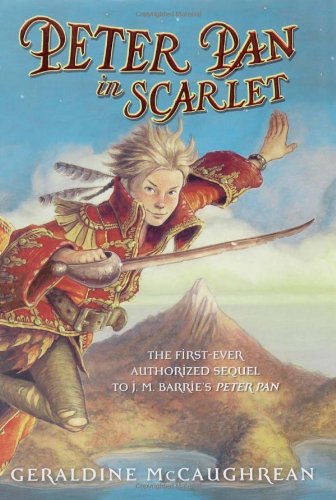 McCaughrean won a competition to pen this sequel to J.M. Barrie's (see Children's Bookshelf, Sept. 14). She faced prodigious challenges in continuing this classic character's story—the original book's tidy resolution and a croc-eaten Hook among them. McCaughrean's complex tale, set in 1926, finds Wendy, the "Old Boys" and John (Michael having perished in the Great War) dreaming repeatedly of Neverland, whose trappings (an eye patch, a live crocodile, etc.) keep turning up nearby. Wendy knows something's amiss, and she and the men set out to catch a fairy in Kensington Gardens (for its flight-inducing dust) and to grow small enough to make a return visit. In one of the book's most charming aspects, the group, having regained childhood and reunited with Peter Pan, loses sight of their mission: "The grown-ups who had set out from London full of good intentions, clean forgot why they had come." Neverland is now autumnal and sere, with its lagoon poisoned and fairy legions warring mindlessly; and a mysterious gent named Ravello, shrouded in unraveling wool, has turned the beasts into circus performers. An adventure aboard the abandoned culminates in the League of Pan's rescue by Ravello, who flatters Pan into accepting him as valet for their next quest—to Neverpeak's summit for Hook's hidden treasure. Pan's resulting transformation may stretch some readers' credulity, and this sequel is more densely plotted than the original. But McCaughrean's story, with its picaresque descriptions, faithfully rekindled characters and an ending that leaves room for sequels, will keep the pages turning. What's missing, and surely impossible to recapture—like Mrs. Darling's one elusive kiss, gone to Peter—is Barrie's rueful, ambivalent, ennui-infused omniscient narrative voice, which made itself nearly as irresistible as Pan himself. All ages.