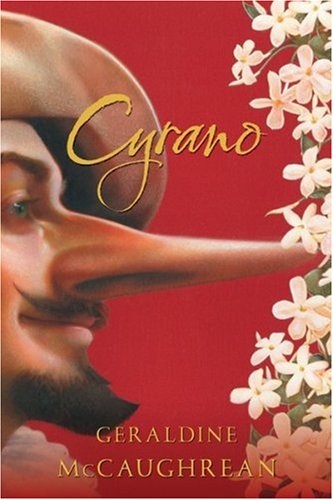 In this eloquent and spirited retelling of Edmond Rostand's classic play, McCaughrean ( , reviewed above) recreates Cyrano de Bergerac as a charming and sympathetic hero. In an opening scene in a theatre, Cyrano berates the star of the play, and his rival Comte de Guiche sends an envoy to "do something about [Cyrano]." As in Rostand's play, the envoy hurls insults at Cyrano about his large nose, to which the hero responds by suggesting a catalogue of wittier insults (e.g., "The Insult Unsporting: You must be the only man who can win a race by a nose before the starter has even fired his gun!") McCaughrean, however, threads in information about the real de Bergerac, who was in love with his cousin (in Rostand's play, the two are not related). Cyrano so adores Roxane that he woos her by proxy, letting her believe that his words are those of a soldier in his regiment, Christian, who, though handsome, lacks wit. He keeps up this ruse long after Christian's death; 15 years later, as Cyrano lays dying, Roxane realizes the truth. The omniscient narrator seems to be infected with the hero's cleverness: to demonstrate his regiment's affection for Cyrano, the narrative states, "With his bowsprit of a nose, he was the flagship of their fleet." All the elements of the original are here, freshly presented—the pathos of "ugly" Cyrano's unrequited love for beautiful Roxane, the flourish of his penned love letters, and the public posturing that nearly obscured his underlying integrity. Ages 12-up.