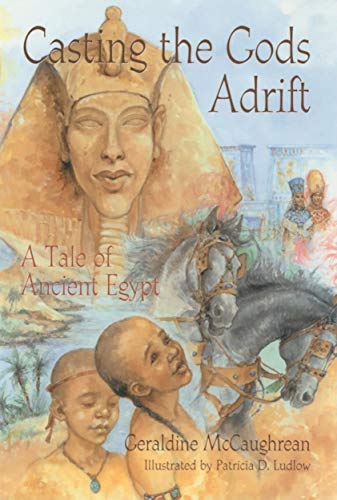 In densely plotted chapters, brothers Tutmose and Ibrim set out with their father, Harkhuf, to deliver their cargo of exotic animals to the new pharaoh. As they navigate unknown waters on the way to the new capitol, Harkhuf and his precious cargo run aground on a sandbar in the crocodile-

infested Nile. After the three are rescued by Pharaoh Akhenaten's own barge, the pharaoh assigns the brothers to learn the trades of their choice. Harkhuf, who faithfully served Akhenaten's father, is disturbed to learn that the new ruler has commanded that the people close down all other temples and that they worship him as the one true god. Detailed descriptions bring the setting to life, particularly those of the palace (the altars "were piled with fruit and flowers, and the walls were painted with rays of the sun, each ray ending in a hand"). The pace picks up when the family escorts the pharaoh on a visit to the Red Country, where his tomb is being erected for his eventual journey to the afterlife. Harkhuf can no longer abide the insults to his religious beliefs, and a vision prompts him to plot the murder of the pharaoh. A skillful plot twist brings the action to a close, and McCaughrean gives readers a glimpse into Egypt's future (and a reference to an archeological find that could well pique interest in further study). Readers hoping to find the humor and cheeky dialogue characteristic of McCaughrean's Greek and Roman myths may be put off by the more formal, almost educational tone of this Egyptian tale. Ages 9-12.