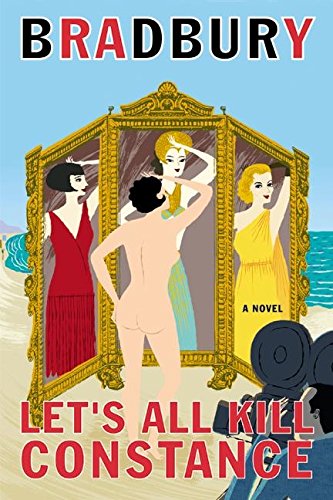 Bradbury, a legend in his own time, seems never to run out of creative inspiration. He follows up last year's acclaimed with a mystery novel that's also a loving, tongue-in-cheek tribute to early Hollywood. Set in 1960, the book features an unnamed science fiction writer ("what if... in some future date people use newspapers or books to start fires," he muses aloud). Late one night (stormy, of course), while he's trying to finish a novel, ancient but still-beautiful screen star Constance Rattigan bursts into his house frantically waving a 1900 Los Angeles telephone directory—the "Book of the Dead," as the writer calls it. Someone has left it at her house, with the names of those still alive circled in red and marked with a sinister cross—her name among them. Is she being marked for death? With his sidekick, Elmo Crumley, the writer dashes from one storied Los Angeles spot to the next, looking for the would-be murderer and warning the others on the list. The tour includes Rattigan's house, set on a nerve-wracking bluff and home to tons of ancient newspapers and a spookily decrepit old man who turns out to be Rattigan's brother, Clarence. Many other eccentrics make an appearance in this whirlwind of staccato dialogue, puns and references to old Hollywood and Chandler-era L.A. noir. Bradbury's giddy pleasure is infectious; though he throws in an unexpected conclusion, it's the author's exuberant voice more than the mystery itself that will have readers hooked.