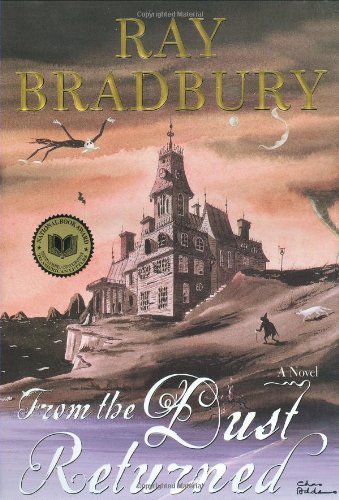 FROM THE DUST RETURNED

If there's a fountain of youth, Bradbury has found it. In the 1940s, at the start of his extraordinary writing career, Bradbury produced a series of popular fantasy short stories about the Elliot family, an assortment of vampires and other odd creatures of various degrees of humanity living in a Victorian castle in the golden Indiana of his youth. More than half a century later, he has fashioned from these stories a novel, funny, beautiful, sad and wise, to rank with his finest work. Full of wide-eyed wonder and dazzling imagery, the stories retain as an integrated whole all their original freshness and charm. The plot is simplicity itself: the vampires and their weird kin gather for a homecoming and share memories. Among them are Timothy, a foundling, whose pet spider is named Arach (originally Spid), and Cecy, immobile in bed but able to enter the minds of others and control their actions. Once, Cecy got a young woman to treat an unwanted but worthy suitor more politely than she would have otherwise: "Peering down from the secret attic of this lovely head, Cecy yanked a hidden copper ventriloquist's wire and the pretty mouth popped wide: 'Thank you.' " Einar, a winged man, acts as a kite for children, writing "a great and magical exclamation mark across a cloud!" Most memorable of a remarkable cast are A Thousand Times Great Grand-Mère, who had been "a pharaoh's daughter dressed in spider linens," and her husband, Grand-Père, who after four thousand years still has ideas. "At age!" she snaps. This book will shame the cynics and delight the true believers who never lost faith in their beloved author.