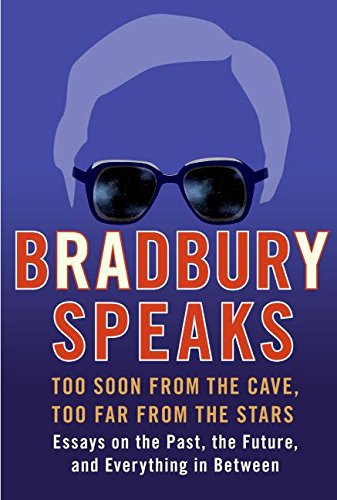 Bradbury Speaks: Too Soon from the Cave, Too Far from the Stars

The grand master's many fans will delight in behind-the-scenes stories about the creation of such science fiction classics as and (which began as a film project for Gene Kelly), but that's just one of Bradbury's many facets on display in this collection of 37 essays. We also learn about his encounters with famous men, from Walt Disney to Bertrand Russell; adventures in Hollywood; and even his love for going out in the rain. Some of these stories may be familiar, and some are told twice, but Bradbury's friendly, conversational tone always makes them worth hearing again. (The tale of how he overcame his fear of flying especially benefits from the jocular narration.) Some of the essays haven't been seen in decades, like an introduction to a paperback edition of Verne's , which cleverly juxtaposes captains Nemo and Ahab, and a dozen are being published for the first time. Whether Bradbury is talking about cross-country train trips or manned flight to Mars, his enthusiasm remains as contagious as ever. The intimate connection many readers already feel through Bradbury's fiction will be strengthened by these highly personal reminiscences.