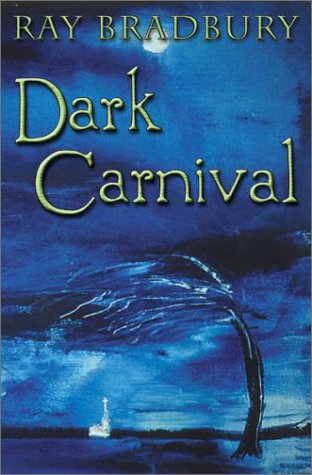 Once to be titled , Bradbury's first story collection rolls back into town, spinning stardust and cobwebs in its wondrous wake. Originally published by Arkham House in 1947, this deluxe reissue features historical notes by John Eller, an introduction and individual story notes by the master himself and a glowing afterword by Clive Barker. Obsessed with death, old age and a longing to retain the eternal child in all of us, Bradbury once described himself as the "quasi god-son of Edgar Allan Poe," though Poe lacked the gift of humor that has helped shape Bradbury's seductive shadows. "You are only eight years old, you know little of death, fear, or dread," writes Bradbury in "The Night" as he powerfully encapsulates in a neat eight pages a child's first discovery of the unknown. Other standouts include the penultimate scary carnival story, "The Jar"; the Elliot family tales, "Uncle Einar," "The Homecoming" and "The Traveler"; "The Small Assassin," a sinister story far more frightening than ; the stunning "Jack-in-the-Box," one of the best parental abuse stories ever written; the harrowing "The Next in Line"; and "Reunion," which uses the simple metaphor of a washing machine in its probing depiction of the grieving process. Magazine covers precede each story with the exception of "The Lost Stories," four pieces rescued from pulp oblivion, while reproductions of manuscript errata illuminate the gestation process of the legendary first edition. Well worth the price of admission and certain to be on discerning Christmas lists.

A Chapbook for Burnt-Out Priests, Rabbis, and Ministers From the Dust Returned