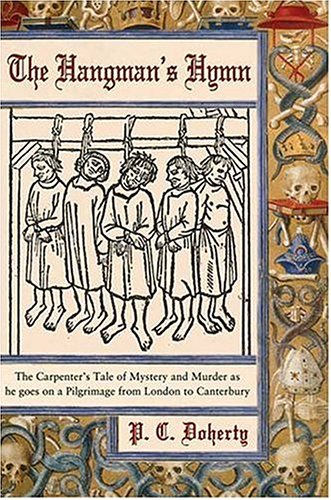 THE HANGMAN'S HYMN: The Carpenter's Tale of Mystery and Murder as He Goes on a Pilgrimage from London to Canterbury

Prolific British author Doherty, whose historicals have ranged as far back in time as ancient Egypt and the age of Alexander the Great, offers an entertaining medieval mystery, the fifth in a series ( , etc.) in which Chaucer's Canterbury pilgrims, in the dark of night, trade ghost stories. Three hangings prompt the carpenter to tell a frightening tale of murder, corruption and witchcraft. The carpenter's woodworker hero, Simon Cotterill, who may or may not be "fictional," is forced to join a Gloucester guild of executioners to avoid destitution. The brutal routine of Cotterill's new career is interrupted when the mayor orders the hangmen, under orders of strict secrecy, to execute three witches accused of a string of murders. The hangings, far from ending the menace, result in even more death, and Cotterill is forced to track down the mysterious coven leader responsible. More successful as an occasionally creepy atmospheric thriller than as a whodunit, this entry again demonstrates Doherty's gift for evoking the past.