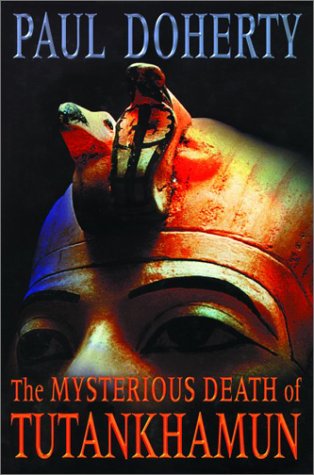 THE MYSTERIOUS DEATH OF TUTANKHAMUN

Although the glorious riches of the young King Tutankhamun's tomb have been displayed in museums around the world, his death at age 18 remains shrouded in secrecy. Why was his burial so hasty? Why was he buried initially in a storeroom rather than in a splendid pharaonic tomb? Why did he die at such a young age? British historical novelist Doherty () answers these and other questions in a splendid historical thriller. He skillfully re-creates the political intrigue, the religious controversy and the military exploits of Egypt's 18th Dynasty as he searches for clues to Tut's mysterious death and burial. Some scholars have theorized that Ay, Tut's vice-regent, murdered Tut in order to gain the throne for himself. Others have implicated Tut's wife in a murder plot. Combing through a mountain of archeological evidence, Doherty concludes that Tut likely suffered from Marfan's syndrome, a disease that causes tissues and vital organs to deteriorate, leading to blindness and physical as well as mental weakness. According to Doherty, such a condition would explain why Tut's tomb contains 413 walking sticks and why many of the tomb's drawings portray him as frail and lethargic. Doherty points out that Tut's death gave rise to a hasty and not altogether proper burial because Ay wanted to keep the king's death a secret from Horemheb, the military commander, so that Ay could assume the throne unimpeded. Zestfully told, Doherty's historical reconstruction of Tut's death is a first-rate page-turner. Color photos not seen by