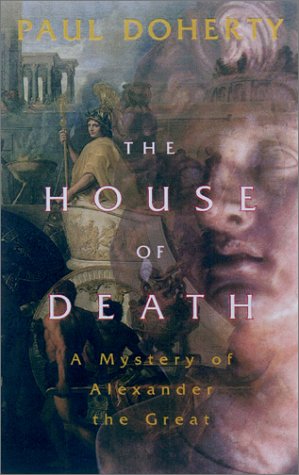 THE HOUSE OF DEATH: A Mystery of Alexander the Great

In 334 B.C. Alexander the Great has decided to add Persia to his conquests, but finds his inner circle beset with intrigue and his own divine personage in peril as spies and murderers stalk the tents of his army in this fast-paced page-turner. The young ruler summons his childhood friend, Telamon, to ferret out the identity of the mysterious Naihpat, suspected to be the force behind the wave of deaths. A physician who learned deductive reasoning studying with Aristotle, Telamon reluctantly accepts the duty. Freeing the spunky redhead Cassandra from the slave pens to act as his assistant, he quickly encounters killings accomplished by Celtic knife and club, poison and pushes from cliffs—even two deaths that occur in "locked rooms," that is, tightly sewn tents with Alexander's guards posted at the only entrance. And with each victim is found a scrap of parchment bearing cryptic warnings taken from the and Euripides. The prolific Doherty, author of and the sizable historical mystery series about Hugh Corbett and Brother Athelstan, deftly handles the period details, from day-to-day life in the camp to the inner courts of the Persian King of Kings, bringing in a vast cast (many soon to die) as Alexander moves across the Hellespont toward the epic battle of the Granicus. Fans of ancient historical mysteries will find themselves in superbly practiced hands.