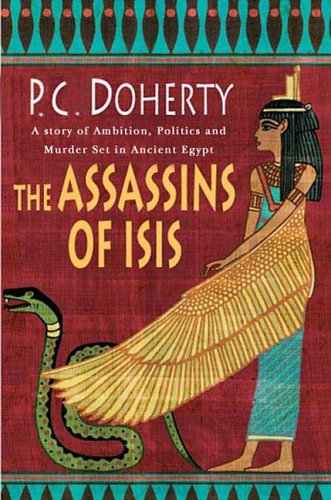 The Assassins of Isis: A Story of Ambition, Politics and Murder Set in Ancient Egypt

Looting of the royal tombs in the Necropolis sets the stage for murder in British author Doherty's involved fifth puzzle (after 2002's ) laid during Egypt's 18th Dynasty, in the third year of the reign of the fiery Pharaoh Hatusu. Charged with finding the tomb raiders, Chief Justice Amerotke makes connections between the thefts and the disappearance of four virgins from the Temple of Isis. These crimes dovetail with the death of the military hero General Suten, bitten by lethal horned vipers that may have been planted on his rooftop terrace. The professional assassins known as the Sebaus suddenly make attempts on Amerotke's life, as the prolific Doherty keeps the historical action boiling in his typically adroit and entertaining fashion.