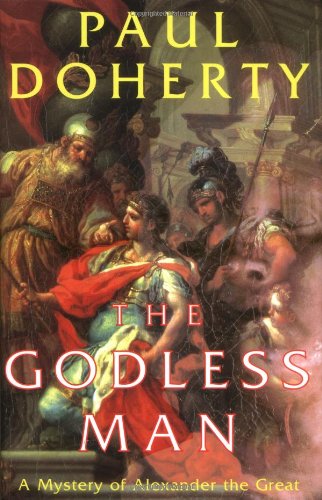 THE GODLESS MAN: A Mystery of Alexander the Great

After his mighty victory at the Granicus in 334 B.C., Alexander the Great sweeps deeper into Persia in this multilayered and entertaining mystery, but when his army captures the city of Ephesus, the march of conquest seems doomed to halt in the face of intrigue and multiple murders. A shadowy assassin known only as the Centaur lurks behind the brutal crimes, and the young warlord commands his personal physician, Telamon, to uncover the identity of the killer and investigate some deep puzzles. In this second appearance after 2001's , the good doctor, aided by Cassandra, his Celtic Maid Watson, must solve a mass murder committed within the securely locked doors of the Temple of Hercules. With a bravura flourish typical of his recent novels, Doherty includes a second locked-room murder as well as the killing of a politically connected courtesan and the death of the old soldier Leonidas, found floating in an ornamental pool in the gloomy mansion known as the House of Medusa. All the crimes are deftly presented and resolved, though Telamon and Cassandra have yet to leap from the page as living characters, and the mincing royal magician, Aristander, remains a painful presence. Details of the political moment in that age of myth and the battleground action compensate for these lapses. Doherty, a proven master of this form, has fertile territory lying ahead for this series.

The Anubis Slayings The Demon Archer