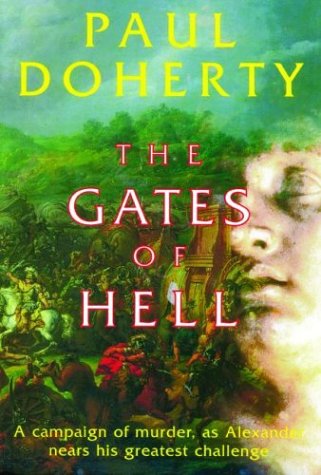 THE GATES OF HELL: A Mystery of Alexander the Great

In 334 B.C., Alexander the Great's march toward world conquest halts before the formidable battlements of Halicarnassus in the third installment of British author Doherty's riveting historical series featuring the sleuthing of Telamon the physician. Scholars race to decipher the enigmatic Pythian Manuscript, which holds the secrets of a fatal weakness in the city's defenses, as well as the location of a fabulous treasure, while spies haunt the Macedonians' camp and counter-spies lurk within the walled fortress. The body of the scribe Pamenes is found on the pavement below his locked room, the so-called ghost-chamber (whose floorboards creak like a ship's rigging when walked upon), and Telamon must decide if his death is accident or murder. Soon other more obvious murders occur, including another body found strangled in the ghost-chamber (even the mysterious death of the villa's cat!). Amid the battles and siege of the city, crucifixion of captured spies and dispatching of soldiers whose wounds cannot be cured, the physician keeps to his investigations. "I cannot explain the deaths of thousands. I can only concentrate on the task in hand. It keeps me sane." Telamon, who wasn't quite a dominant element in the previous novels ( and ), comes to full literary life in these pages, as the prolific Doherty moves masterfully from a terrifically atmospheric prologue through the fiery fall of Halicarnassus. As usual with this assured writer, the solution to the crimes is extremely satisfying.

The Death of a King