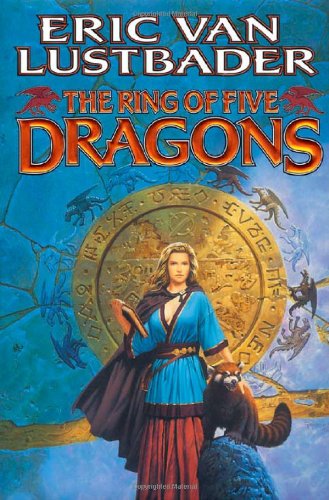 THE RING OF FIVE DRAGONS: Volume One of "The Pearl" Saga

An imaginative, otherworldly culture clash between technology and spirituality fires this ambitious first novel in a projected multivolume epic fantasy from bestseller Lustbader (;; etc.). Under the oppressive rule of the technologically superior V'ornn, the spiritually evolved people of Kundala have suffered a century of enforced slavery, wondering why their goddess Miina has abandoned them. The militaristic Gyrgon technomages, members of a V'ornn caste, yearn for the secrets of Kundalan magic, yet their misuse of the lost Ring of Five Dragons could be cataclysmic. Gifted in healing and mystical arts, the twin Ramahan priestesses, Giyan and Bartta, know they must locate and protect the prophesied savior, Dar Sala-at, "the Chosen One of Miina who would find The Pearl and use it to free the Kundalan from their bondage to the V'ornn." The twins head a huge cast—an appendix lists 30 major characters—that parades against the backdrop of Lustbader's richly detailed tapestry, with its complex plotting, fluid action writing and vivid descriptive passages. Another appendix provides a pronunciation guide to the V'ornn language, but a much-needed lexicon to Lustbader's litany of curiously coined words (, , ) is unfortunately absent—a minor quibble, since both newcomers to Lustbader and his ardent admirers will champion this novel as a potent portal to fabulous mythic realms.