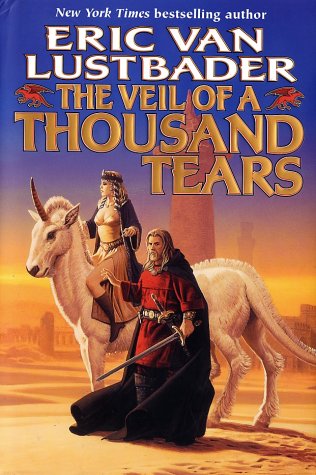 THE VEIL OF A THOUSAND TEARS: Volume Two of The Pearl

Bestseller Lustbader offers the second installment in an ambitious fantasy saga both sketchy and overly detailed. Having saved the besieged planet Kundala from destruction in (2001), Riane, the magically transformed and gifted child of the Kundalan sorceress Giyan and the assassinated regent of the V'ornn invaders, stands revealed as the Dar Sala-at, the Chosen One of Prophecy. Now Riane searches for the Veil of a Thousand Tears and its power to release Giyan from possession by the archdaemon Horolaggia. En route she acquires information (little of which anyone understands at this stage in the epic) and companions with names like Tezziq, Rekkk and Thigpen. Resistance fighters, nobles and others pursue their own agendas through an impenetrable maze of destiny and double-crossing. While his blend of pseudoscience and fantasy owes a lot to Arthurian legend, Asian fairytales and the work of Frank Herbert, Lustbader creates a unique tale with the compelling style that has distinguished his writing since his renowned Sunset Warrior fantasy cycle in the 1970s. Unfortunately, maps and appendices do little to unravel the elaborate physical and sociopolitical background, swamped by an abundance of names and terms more easily gargled than remembered. Even experienced disbelief-suspenders will have trouble believing in members of a warrior caste who only know one swear word. Lustbader fans will be thrilled, but readers used to more mainstream fantasy may be daunted.