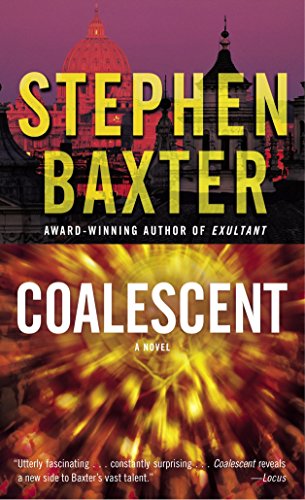 Known for his hard SF, Baxter (the Manifold trilogy) explores social and historical issues as well as human evolution in the first of his Destiny's Children trilogy, with mixed results. In the present, George Poole discovers that he has a twin sister who belongs to a mysterious, ancient quasi-religious order in Rome; in crumbling post–Roman Britain, Regina, founder of the order, longs to recapture the days of her girlhood, when she lived a life of stability and privilege. In alternating chapters, George and Regina each make their way to Rome. George meets his sister and begins to learn something of the order that took her in; Regina—complex, bitter, obsessive—crafts the order that lasts to George's day. Regina digs under the streets of Rome into catacombs for secure living space. George, distantly related to Regina, feels the familial pull of the women still living in the warrens underground, but when he befriends a young, pregnant member of the order, he realizes that they have evolved into a new life form, a coalescent one comprising drones working within a decentralized social order. Regina's carefully researched world never quite comes to life—Baxter tells rather than shows—and the feminist implications of a coalescent life form that exploits and alters femininity are not addressed. Still, Baxter provokes thought by plausibly creating specific circumstances that result in evolution. For now, it's unclear whether a coalescent structure is good or bad, though presumably later books will provide some resolution.