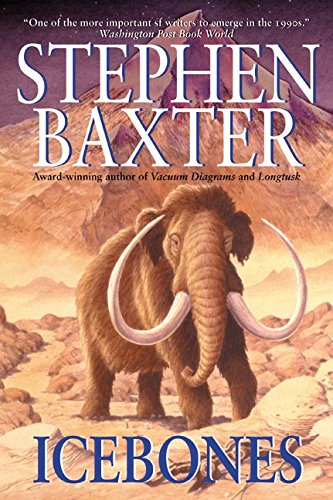 Transported to the Sky Steppe of Mars in the final, satisfying book in British author Baxter's highly original Mammoth trilogy (; ), his engaging wooly characters face an abandoned and potentially lethal terraforming experiment left there by humans (aka "the Lost"). Matriarch mammoth Silverhair's daughter, Icebones, awakens from an unnatural slumber to find herself in a land and time far from her native Pleistocene earth. The mammoths here have no knowledge of their ancient culture, such as the teachings of their mighty progenitor, Kilukpuk. Mammoth tradition says the Sky Steppe is "the Island in the sky where... mammoths would one day find a world of their own, free from the predations and cruelty of the Lost, a world of calm and plenty"—yet whatever promise Mars once held is fading now as the changes made by human engineers are reversed under the assault of the red planet's uncompromising weather and geology. Icebones's companions, used to depending on the Lost for everything, can't possibly survive alone. Their only hope is to cross half the world to reach the Footfall of Kilukpuk, a rich valley full of all the sweet grass and water the mammoths need. The journey is long and treacherous, but as the beasts' great Cycle says, "The mammoth dies, but mammoths live on." Baxter fills the tale with taut adventure and splendid settings, making it easy to suspend disbelief.