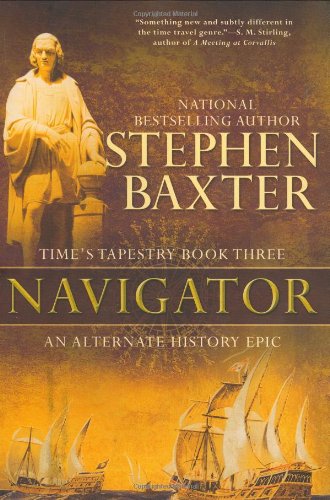 The engrossing third Time’s Tapestry novel (after and ) from Philip K. Dick Award–winner Baxter focuses on Christianity’s reconquest of Spain from the Moors between A.D. 1070 and 1492. This conflict is reflected in the struggle between the English and Spanish branches of a family, both of which have received mysterious prophecies and coded instructions containing designs for weapons that could give one side power to annihilate the other. The characters’ beliefs and passions shape events, but they don’t know how much they have been manipulated by competing tempters from the future. By book’s end, two forces emerge to debate whether Christopher Columbus will be given ships to sail west or an army to lead east in an apocalyptic war against Islam. Baxter understands how a craving for beauty and knowledge can become ghastly fanaticism, and he’s also very good at showing his characters thinking within the limitations of their time.