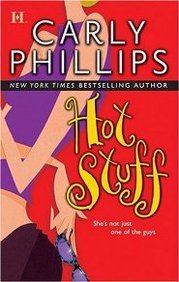 Phillips ( , etc.) kicks off Harlequin's new single-title romance line, HQN, with a sizzling but somewhat insubstantial tale, the first in her new trilogy involving three orphaned sisters left in the care of their tough-talking uncle Yank Morgan. A ladies' man with a penchant for gambling, Uncle Yank hasn't a clue what to do with three little girls, so he trains them to become major players at his Manhattan sports agency. Annabelle, the eldest, has become a powerhouse in the PR department, but her attraction to egocentric bad boys has proven to be a problem. After her latest boyfriend dumps her for an actress, Annabelle takes a personal vow of celibacy that lasts about as long as an ice cube in August when she meets her newest client, ex-football star Brandon Vaughn. Annabelle initially writes Brandon off as another handsome jock, but she soon discovers that he's different than the rest. He's building a lodge for kids with learning disabilities and, since someone seems intent on sabotaging his efforts, he needs positive publicity fast. The bland mystery doesn't add much zest to Phillips's predictable plot line, but this breezy book will likely score a touchdown with readers looking for sexy thrills and instant gratification.