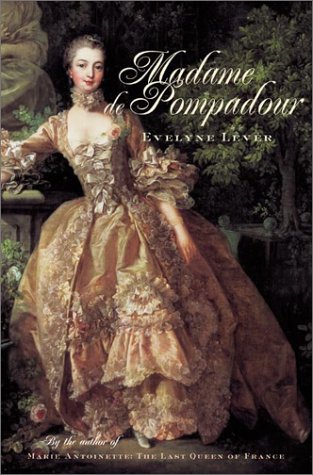 French historian Lever () not only puts in context the long-ago world of 18th-century France—a world in which married women openly engaged in petty intrigue to gain their handsome, horny and self-absorbed monarch's attention—but she also guides readers to a better understanding of King Louis XV's favorite mistress. The former Jeanne-Antoinette Poisson (1721–1764) was known to the royal inner circle as "the oracle of the court" and "Prime Minister" (a reflection of her power), but the king's children referred to her as "," or Whore mommy. She had beautiful homes, unlimited funds, unchecked power and a status she would never otherwise have achieved, given her bourgeois background. Like Christine Pevitt Algrant (see review, p. 165), Lever has crafted a detailed and fascinating portrait of the woman who pretty well ran France from 1745 to 1764, but where Algrant is restrained, Lever is unafraid to take sides. She says, for instance, "The Marquise-Duchesse's ambitions knew no bounds, so great was her need to be recognized and highly regarded." Addressing why Pompadour was willing to go to great lengths to maintain her hold over the king (and therefore her status), Lever says it makes sense given that her mother was "not exactly a pillar of virtue" and "her free-and-easy morals were damaging to her daughter." Lever's prose is occasionally overwrought but, given the nature of the subject, some purple prose may be forgiven in an otherwise beguiling biography. 8 pages of color illus. not seen by .