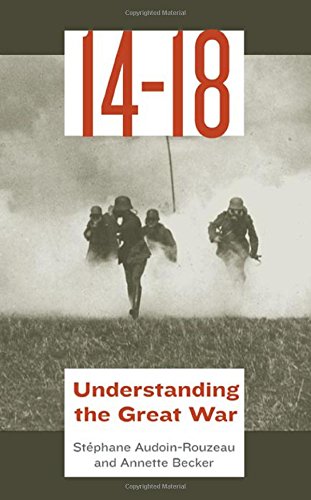 Over the last 15 years, French scholars have produced a body of research that has fundamentally altered the history of WWI, though much of the work remains largely unknown in the U.S. The authors, directors of the French Museum of the Great War, draw on much of that work and see the war through three transformative, overlapping lenses: violence, crusade and mourning. In a striking contradiction to current U.S. historians' approaches, the authors assert the necessity of battle history—not as a techno-historical end in itself, but as source material for a richly textured analysis of the interrelated effects of violence on soldiers and civilians alike, culminating in a discussion of the way the confinement of military prisoners and the widespread internment of civilians combined to institutionalize a "concentration-camp phenomenon…that would reemerge two decades later in far more sinister contexts." Further, when the combatants began by defining the war in patriotic terms, as a war of national defense, it became a crusade. Patriotism escalated into a perception of the conflict as between civilization and barbarism, a dichotomy accompanied by crude hatreds and reflexive dehumanization of the enemy, fueled by the experiences of military occupation, and by the myths (or what we might now call "urban legends") produced by it. The final consequence, the authors argue persuasively, was the development of full-blown eschatologoical expectations—that the war would really prepare the way for God's dominion on earth. The resulting disillusion opened the way for individual and collective mourning as the bereavements caused by war finally sank in. Disillusion, however, also opened the path to even higher levels of violence to force achieve the frustrated messianic ends. In the final analysis, the authors suggest, the Great War left a dual legacy—grief and totalitarianism.