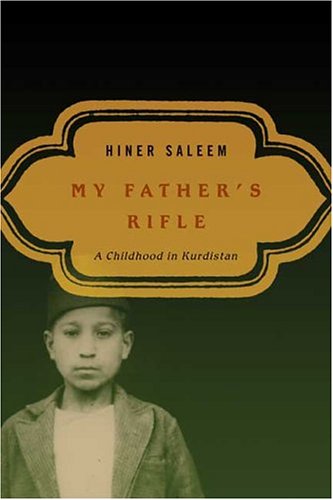 MY FATHER'S RIFLE: A Childhood In Kurdistan

Using a child's unsparing, detailed eye, this boyhood chronicle of life in embattled 1960s and '70s Kurdistan portrays a time of soaring nationalist pride, family tragedy and government betrayal. With stirring lyricism, Saleem writes of his oppressed Iraqi homeland, his mother's fruit-laden orchard, his cousin's stunt pigeons, his father's ancient Czech rifle and his own place in a unified village community where every man would fight for the Kurdish way of life. Saleem and his family join those Kurds who, leery of Saddam Hussein's Baath Party's promises of peace, flee to the mountains, where they put up fierce resistance and are finally forced across the Iranian border into refugee camps. After the Iraqi government eventually prompts the Kurds to return to their villages, Hussein then moves hundreds of Arabs to their territories to establish homes and businesses, transforming much of Kurdistan into a haven for true believers in the Baath Party, although the Kurdish (volunteer fighters) continue to battle for their homeland. Saleem's family goes home, but the Baath pressure forces the author and his brothers to settle in Europe; his sister remains in a concentration camp (and thus is not able to attend their father's funeral). Saleem, who's now a filmmaker in Paris, offers a haunting, sympathetic account of a young life amid the horrors of a war zone.