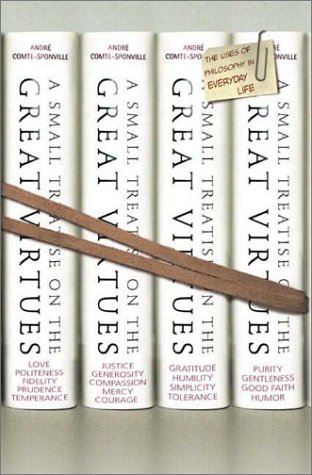 A SMALL TREATISE ON THE GREAT VIRTUES: The Uses of Philosophy in Everyday Life

French right-wing "nouveau philosophe" Comte-Sponville, a professor at Paris's Sorbonne, had an international success with this not-so-small book, though it's unclear how many buyers have made it all the way through. Dividing the book into 18 virtue-based chapters—"Politeness," "Fidelity," "Prudence," "Temperance," "Courage," "Mercy," "Gratitude," and so on—Comte-Sponville quotes a multitude of philosophers from the ancient Greeks through Spinoza, Hobbes and Nietzsche to modern Frenchmen like Vladimir Jankelevitch. But doing so fails to make what is essentially a quirky, self-centered monologue into an all-ages dialogue: "Kant and Rousseau think gratitude a duty. I'm not convinced. Moreover, I don't really believe in duties." Such pronouncements presume a reputation and familiarity that does not carry over to these shores. The humorless writing on humor seems oddly pitched as well: "One mustn't exaggerate the importance of humor, however. A bastard can have a sense of humor, and a hero can lack one. But as we have seen, the same is true of most virtues, and as an argument against humor it proves nothing, except of course that humor itself proves nothing." This is Comte-Sponville's first book rendered in English, and despite the concise translation (by Catherine Temerson), it's not hard to see why.

How Proust Can Change Your Life.