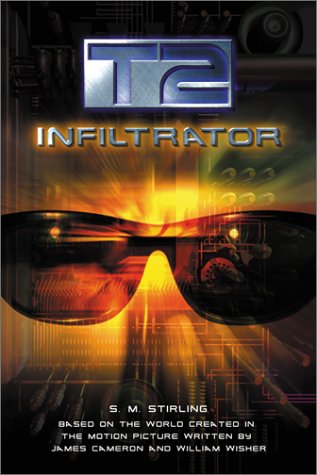 Based on the world created in the motion picture written by James Cameron and William Wisher, this superior franchise fiction is the next best thing to . Stirling (, etc.) is a skillful writer of action SF who has studied both the first (1984) and (1991) carefully. He gets the details right, and he's also thought about how, after two failures, the evil master computer of the future would modify the robots it sends back in time to kill its nemesis before he grows up. The new Terminator is female, mechanically and genetically enhanced but able to masquerade as a normal woman. She interacts with and attempts to manipulate a large cast of characters that includes, naturally, Sarah Conner and her now-teenaged son, John. Mother and son imagine they're safely hidden in Paraguay, their anti-machine crusade over, until they are noticed by a retired secret agent who happens to be a double for the nasty Arnold Schwarzenegger/first Terminator. When he innocently discovers who they are, the new Terminator also finds out and sends mechanical assassins after them. And the novel, which has been moving along steadily and efficiently, shifts into high gear. Stirling structures the plot well, and the action builds to a gripping climax—which doesn't really conclude much, since this series obviously is intended to run many more books. If they're done this well, it will be an enjoyable ride.