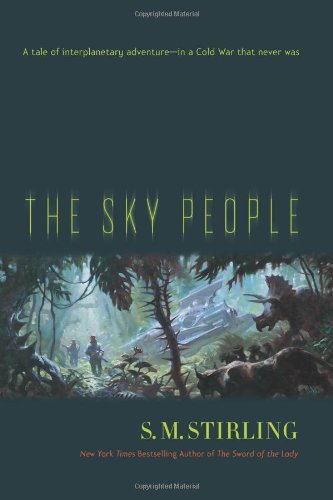 For this rollicking first of an alternate history series, Stirling ( ) uses the terrific premise that Mars and Venus are exactly as depicted in pulp-era SF, eerily Earth-like and populated by prehistoric people and creatures. When 1960s space probes find that Venus is habitable, the Americans and Russians scramble to set up colonies and get in good with the natives. In 1988, a Russian rocket crashes in the wilderness and can only be reached by an airship from the U.S. Commonwealth base of Jamestown, crewed by a classic love triangle: Ranger Lt. Marc Vitrac, Harlem-born geologist Cynthia Whitlock and ultra-British anthropologist Christopher Blair. Stirling doesn't stint on old-fashioned elements, most notably the gorgeous native princess with magical powers, but the multiculturalism sidesteps most stereotypes while retaining a broad-brush pulp sensibility; the science is refreshingly realistic; and everyone cusses (sometimes in awkward translation). Readers will eagerly anticipate a trip to Mars in the sequel, .