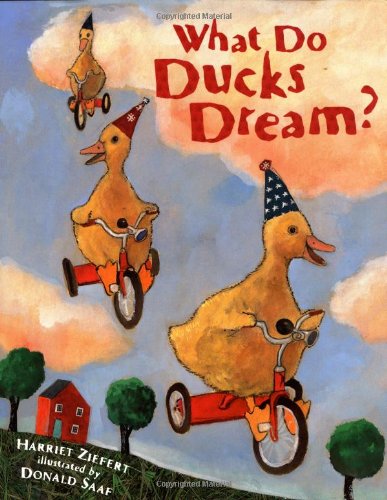 WHAT DO DUCKS DREAM?

Its title notwithstanding, this bland book has little to do with ducks. The web-footed birds figure in only one spread ("Fluffy ducks in their sleepy hours/ Fly their bikes over hills and flowers"), which pictures them riding airborne tricycles and wearing party hats. Other couplets describe the reveries of horses, cows and goats. In an incongruous turn, the volume notes that nocturnal predators are afoot ("The fox thinks stealing chicks is nice;/ the snake likes eggs;/ the owl hunts.../ mice!"). But just as quickly, it returns to placid musings on sleeping children in a farmhouse and ends with the greeting, "Good morning!" Ziefert (previously paired with Saaf for ) sets the scene on "Sigmund's farm," then alludes to the farmer's identity in an idiosyncratic note about : "Freud... cites proverbs that suggest the dreams of animals may be pure wish fulfillment." Saaf provides handsome mixed-media collages of cut photos, straw, wallpaper and paint. He juxtaposes dense patterns and shadowy greens and grays that immobilize rather than free the dream images. Dr. Freud might support the artwork, especially in its vaguely menacing moments, but not trite verse like "A sweet dream is a gift from you./ If you're lucky, it may come true." Ages 4-8.