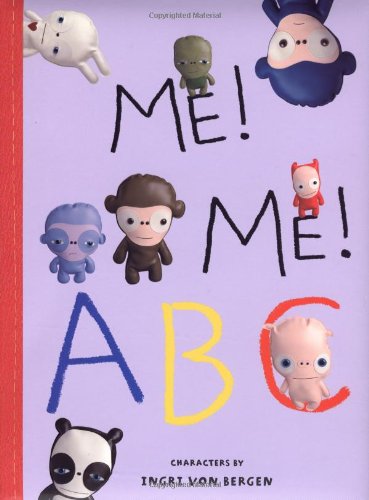 Using multicolored faux leather and jellybean-glossy plastic eyeballs, Von Bergen stitches "Ingri dolls" with oversize heads and teeny bodies in this padded paper-over-board volume. Ziefert, smitten with the dolls (as stated in an author bio), composes this abecedary as a means to pose and photograph them in abstract digital-art settings. Her ABC statements, lettered in a crayony scrawl, sound like children's demands, from "Admire me," "Buckle me" and "Call me" to "eXercise with me," "Yippee for me!" and "Zip me." A lavender gorilla wears a magic-marker crown and commands, "Obey me," while a coy pink-faced child in a red devil suit stands behind a "Pay attention to me" placard. An afterword introduces (and unabashedly markets) the eight stars of the show, including inseparable monkeys named Moki and Miko, a mini-Frankenstein's monster called Tito Turtle, a sleepy-eyed panda and a wide-eyed innocent pig. All of them resemble infants, and their hairline smiles and frowns are drawn on rather than permanently attached, allowing them to change expression (or close their eyes dreamily). Von Bergen's neatly sewn, smooth-skinned creations get effective product placement, while the ABC lesson plays a distant supporting role. Ages 4-8.