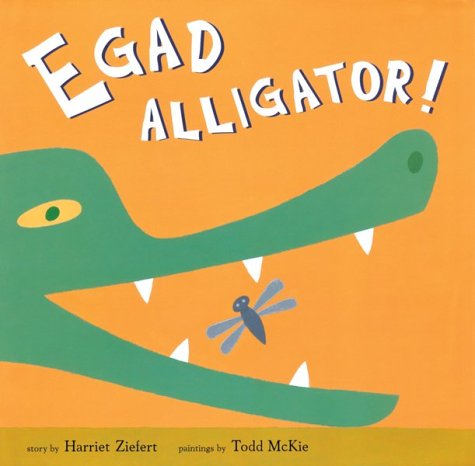 When Little Gator goes exploring there's no telling what trouble he'll encounter in this misadventure from the team behind . Here, Ziefert takes an alligator's eye–view as she imagines the hero on the go. He's only trying to be friendly, but when he meets a group of people they all shriek, "Egad Alligator!" He tries to taste potato chips at a picnic and someone slings an arrow at him. Frightened, Little Gator runs away. Even as he retreats, he's rebuffed—first, by white herons who think he will steal their eggs, then by baseball players who try to "bop him over the head" when he attempts to catch a ball between his teeth. When Little Gator finally meets something that scares him, the tables are turned ("Egad python!" he cries). McKie's childlike illustrations, saturated patches of thickly applied paints in pumpkin orange, gourd green and butter yellow provide just the right accompaniment. Ages 4-8.