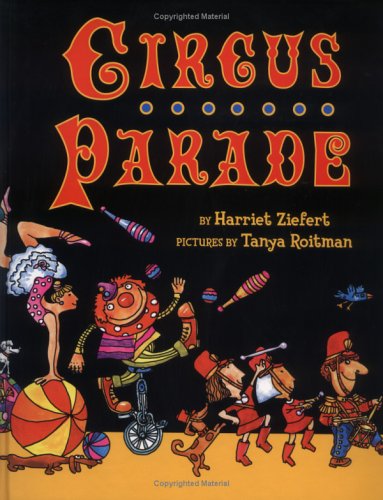 An entire town has come out to watch the title event march down the main street, but no worries: this book gives readers a front row seat. In simple couplets, Ziefert ( , reviewed above) ticks off the sights and sounds that pass along the pages' single plane of action: "A rat-a-tat-tat, a rum-a-tee-tum.../ Sounds the beat of the first snare drum./ A dancing dog from Kalamazoo/ Shows the crowd what he can do." Some of the rhymes lack the energy of its Big Top subjects ("An elephant's walking down the street./ We know him by his trunk and feet"), but Roitman more than makes up for these fallow moments. Her jubilant visual mélange of cartooning, childlike art and streamlined representation captures the circus's own heady brew of performers and performing styles. The street itself is a key element to the spreads' liveliness; Roitman renders it as a wide, literally pitch-black strip, so that even though the parade takes place in daylight, the performers seem to be moving through a darkened, theatrical space that heightens the vibrancy of their expressions, poses and costumes. As a real-life cultural happening, the circus parade may be pretty much on the endangered species list (when was the last time the crew from Barnum & Bailey tromped down any Main Street?), but it's still alive and well in this book's fictional universe. Ages 5-8.