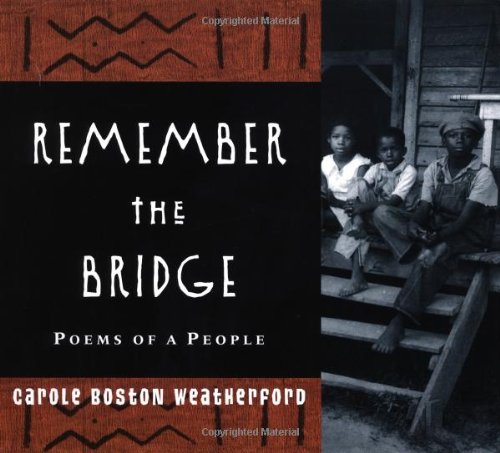 REMEMBER THE BRIDGE: Poems of a People

This strikingly designed volume, originally begun as a graduate school photo-essay project, traces 400 years of African-American history by pairing Weatherford's () poetry with period photographs and engravings. The author profiles individuals, both imagined and historical; as she sees it, "The bridge [of history] is men and women,/ famous and unknown,/ leaving paths of memories,/ timeless stepping stones." Her subjects are sometimes anonymous (an African woman sold into slavery, a farmer, a basket weaver, a cowboy), sometimes prominent (Harriet Tubman, Jesse Owens, Martin Luther King Jr.). Unfortunately, Weatherford's free verse can be eloquent, but when molded to the meter of rhyme, her poetry at times becomes pedestrian and clichéd ("Me, in my sailor suit/ off to Sunday school,/ ready with a Bible verse/ and the Golden Rule"). The order of the material is confusing as well—the narrative starts out chronologically, then skips around, as when a photo of a 1930s farming family appears before a mention of a Civil War regimental hero. Many of the illustrations are breathtaking in their impact, particularly the initial photographs, but the visual momentum eventually dissipates amid a series of static portraits. The presentation is consistently handsome, with photos and engravings done up in sober sepia shades keyed to brown fabric borders, but the solemnity and weight it lends the proceedings are ultimately undermined by the less rigorously conceived text. All ages.