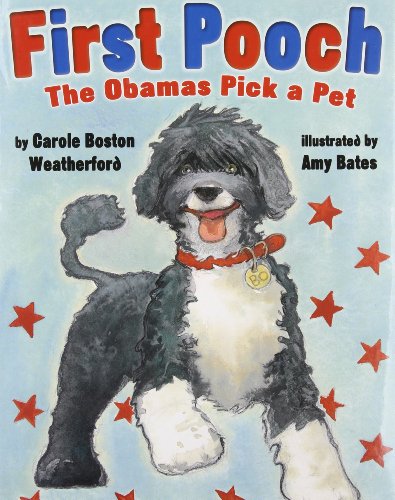 After citing previous presidential promises, such as when Kennedy promised to land a man on the moon, Weatherford ( ) moves on to Barack Obama's promise to his daughters that they can get a puppy. While their father campaigned, Malia and Sasha “wore curls and party dresses to join their parents onstage” and “put up with Secret Service agents always on their heels,” believing, the author muses, “it was worth it if they finally got their dog.” Building up to first dog Bo's arrival at the White House, the account spotlights several previous presidents' canines and imagines the process of deciding what kind of dog the family might choose. The story is curiously anticlimactic, providing scant info about Bo, who appears only on the final spread. Rendered in watercolor, pencil and gouache, Bates's ( ) illustrations have a loose, sketchy quality, emphasizing the energetic nature of the various dogs that appear. Ages 4–8.