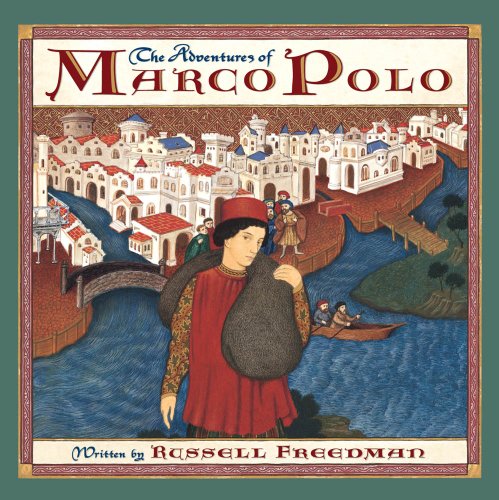 The Adventures of Marco Polo

Freedman ( ) here investigates the puzzle posed by the more than 150 extant versions of the 13th-century explorer Marco Polo's book, . In his introductory and last chapters (as well as a concluding author's note that lays out where modern scholars stand on Polo), Freedman acknowledges that many, from Polo's day forward, have contested the veracity of Marco's claims, which included a three-year governorship of Yangzhou and work as a "trusted envoy" of Kublai Khan. In the fascinating central chapters, Freedman sidelines skepticism: he quotes liberally from Polo's account, retracing the amazing journey to and from lands unfathomable to most Europeans living at that time. Marco, at age 17, with his merchant father and uncle, trekked through the Middle East, India and China, sailing over four seas, on a journey that would take nearly 24 years to complete. Ibatoulline's accomplished paintings reflect the artistic conventions of the cultures Marco encountered (his sources are noted) and act as a visual bridge between the events of the text and captioned archival reproductions throughout—many from editions of Marco's book (meticulously credited in endnotes). Two double-page maps (modern geographically, yet charmingly naïve in style) trace Marco's route to and within China, and the seagoing journey home. Creamy pages resemble parchment, and attentive design elements include illustrated boards with gilt inlay. Freedman's impeccable research, historical fidelity and flair for engrossing narrative nonfiction combine with handsome bookmaking for a highly recommended biography. Ages 9-12.