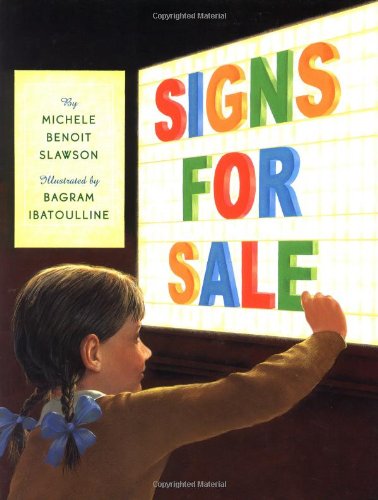 Slawson's () childhood yields another nostalgic slice of family life. The narrator spends a summer in the 1950s on the road with her dad, a traveling salesman who peddles neon signs. Popping gum into his mouth to "sugar up the lips and make the sweet words flow," he may irritate some adult readers with his slickness—but his daughter adores him. She proudly joins him on a series of sales calls, and even salvages a deal with penny-pinching Mr. Hansen, a drugstore owner. "Papa and I are traveling salesmen," she concludes, and her father rewards her with her own pair of sunglasses, just like his. Ibatoulline's paintings lack the energy of his artwork for , and the resulting images feel somewhat static by comparison, especially when conveying the relationships between the supporting characters. Here he envisions a postcard version of '50s small-town America where everyone is white and well-scrubbed: Papa is king of the road in his gleaming fin-tail convertible; stout Sophie presides over her spotless diner; a family rejoices as a workman hangs their first-ever neon sign over their store. (Paradoxically, only Mr. Hansen's sign-less drugstore seems to have any customers; the other settings are strangely underpopulated). Despite some hokum, however, the illustrations are nearly as successful as the text in conveying the daughter's gumption and relationship with her father, the heart of this warm tale. Ages 4-8.