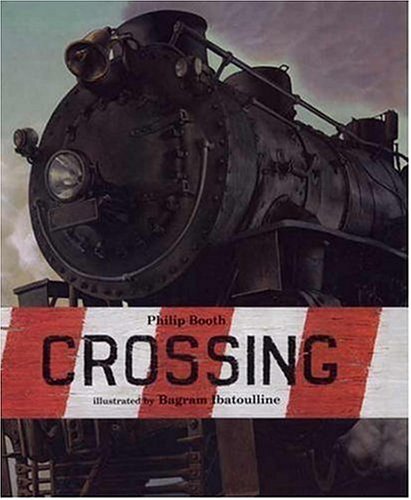 This pairing of Booth's nearly 50-year-old poem (originally published in ) with the exceedingly lifelike gouache paintings of first-time illustrator Ibatoulline is right on track. The artist in style and treatment resembles a Norman Rockwell, but his more painterly approach exudes emotion. He firmly places readers at a rural rail crossing (based on a real one in Brunswick, Maine) as a freight train barrels past. Booth's lyric verse ably suggests the rhythm of the moving boxcars: "Warning whistle, bellclang,/ engine eating steam,/ engineer waving,/ a fast-freight dream." Italicized numbers interspersed throughout the poem keep track intermittently of the trains 100 cars: "/ hoppers of coke,/ Anaconda copper,/ hotbox smoke." As Booth introduces a veritable railroad lexicon, Russian-born Ibatoulline treats readers to 16 different angles of the same crossing and creates a sense of the mid-20th-century community through which the train briefly passes. The opening spread presents a bird's-eye view of the railroad junction with only smoke preceding the train in the distance. A few pages later, the artist shows the iron behemoth from a child's vantage, as a boy waves up to the cheery conductor. One entire painting is the reflection of two boxcars in a waiting car's windshield. A group of friends, separated by the train and seen waving through its couplings, unite after the train departs. This slice of Americana is sure to chug full steam ahead into the hearts of train enthusiasts young and old. Ages 5-9.