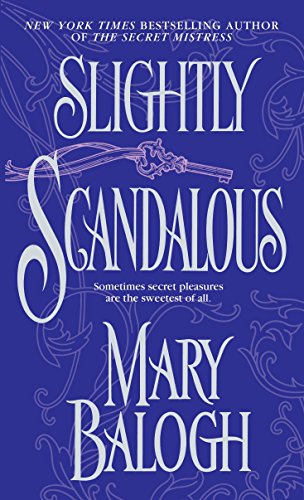 Balogh's Bedwyn family trilogy () concludes in fine style with this exceptionally entertaining Regency-era romance between bold Freyja Bedwyn and the mischievous Joshua Moore. Freyja's adventure begins en route to Bath when Joshua, the Marquess of Hallmere, takes refuge in Freyja's bedroom at an inn. He gives her an unwanted kiss, and she gives him a bloody nose. Matters turn even more merrily askew when the two meet up again in Bath. To thwart Joshua's scheming aunt, who's trying to manipulate him into marrying his cousin, they declare a truce long enough to enter into a pretend betrothal. Neither foresees the stir created by the charade—or the arrival of Freyja's brother, the Duke of Bewcastle. Meanwhile, the couple must contend with a murder charge drummed up by Joshua's aunt to keep him from spoiling her ambitions. When passion enters the picture, the unlikely pair find themselves in danger of taking a trip down the aisle in earnest. Balogh's protagonists are complex and charismatic—the kind of people you hope to be sitting next to at a party. Secondary characters like Joshua's mentally handicapped cousin and a disgraced family employee also take on a life of their own. With its impeccable plotting and memorable characters, Balogh's book raises the bar for Regency romances.