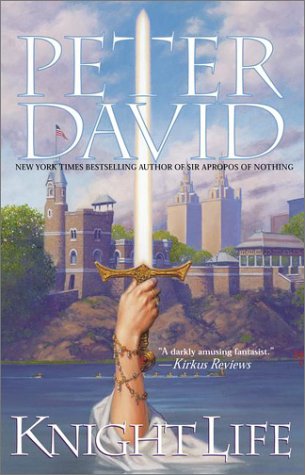 Arthurian legend gets another kick in the pants with this rollicking rewrite of bestseller David's first novel, originally published in 1987. Extensively updated and lovingly revised, this hilarious romp in today's New York features a cast of zany characters, zippy dialogue and enough action and plot twists to satisfy most satirical fantasy fans. After 10 long centuries spent trapped in a magical cave, King Arthur is finally rescued by a pint-sized, wisecracking Merlin, who has aged backwards enough to slip through the bars of his own prison. The "once and future king" arrives, in armor, no less, on the streets of the Big Apple. Soon, with the help of Master Merlin, the charmingly anachronistic and good-hearted "Arthur Penn" is running for mayor of New York. Meanwhile, much to Arthur's dismay, the reincarnated but unemployed Guinevere, aka Gwen DeVere Queen, is already living with Lance, an unpublished and also unemployed "misunderstood" writer. Morgan, aka Morgana le Fey, Arthur's half-sister sorceress, bored and gone to seed in a dumpy New Jersey apartment, becomes angry enough to get back into fighting form when she discovers her spell has been broken. With the help of Moe Dreskin (aka her bastard son, Modred, PR whiz and erstwhile murderer of his royal father), Morgan schemes to put Arthur and Merlin back where they belong. But she has no idea just how determined Arthur's eclectic election team is to fight back and reinvent Camelot in the "kingdom" of Manhattan.

Sir Apropos of Nothing Dead of Knight